We’ve been in Lyon for about three weeks now and while we love the city, we’re going a little stir crazy. Classes don’t start here until the 17th, which means that I’ve been effectively “off duty” work-wise since the beginning of May. (I don’t count teaching online, as that wasn’t really an everyday commitment like grad school/full-time teaching.) We moved back to Michigan at the end of July, so Dani has also been off for the last two-plus months; while it’s been nice, we’re also both very much feeling the need to get back to a routine.

So in an effort to keep ourselves occupied until we’re back to the long-awaited “real world”, we decided to take a day trip to Pérouges, a medieval town just up the road from Lyon. At first I was a little bit skeptical, as I thought it might be packed with tourists and totally inauthentic as such little towns can be (I’m looking at you, Frankenmuth and Mont-Saint-Michel) but much to my surprise, we had the place (mostly) to ourselves!

There wasn’t much to do in the cité itself other than take in the scenery and eat which is, let’s be honest, not a problem for either of us. There are some walking trails that circle Pérouges and then go out into the surrounding countryside that vary in length from 30 minutes to about 2.5 hours. Since Lucie came with us and we were operating on a semi-strict timeline because of the train schedule, we picked the 1.5 hour long trail. We ended up not finishing the whole thing because it was blazing hot and poor Lucie was wrecked, so after not quite an hour we took a shortcut back to Pérouges, had an absolutely enormous lunch, then milled about the town until it was time to had back to Méximieux to catch the train to Lyon.

You can click on any one of the photos below to see a larger version!

Dani gets angry when I don’t properly credit her photos. She took this one! 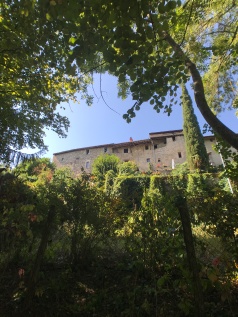 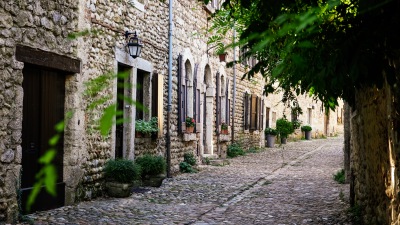