As Dani and I planned the itinerary for our time in Munich, we looked at a few possible day trips to get out of the city and see some of the other cool stuff that Germany has to offer. I was originally most interested in visiting Schloss Neuschwanstein, that giant castle that was supposedly the inspiration for the Sleeping Beauty castle, but given that it is a Mecca for Instagram “influencers” (and wannabes) and knowing that it would be likely overrun with people all vying for the same exact shot, I decided against it. A deal on GetYourGuide for a day trip to Salzburg, Austria, however…well, it piqued my interest. We hadn’t realized how close Munich actually is to Salzburg (a mere 2 hours on the train) and being pretty big fans of The Sound of Music, we decided to go for it. Popping over to Salzburg for the day also offered an added bonus: another country to cross off our “visited” list!

The morning of our day trip we had enough time to grab breakfast and a coffee before wandering over to the meeting point at the train station. Once we boarded the train, our guide, Maxine, gave us a historical overview of Salzburg and also talked quite a lot about The Sound of Music and the different places around town where key scenes were filmed. Dani and I have a tradition of watching the movie every year around Christmas time, so we were definitely excited to see the locations in real life! The trip itself was quick and just before we rolled into the train station, we got a stunning view of Salzburg from the train – fortress atop the hill and all.

Our guide started us on a walking tour, and the first stop were the Mirabell gardens, where much of the iconic “Do-Re-Mi” sequence from The Sound of Music was filmed. We had a few free minutes to wander through the garden, then met back up with the group to head over to the Old Town. We’ve seen a lot of Old Towns, living in Europe, and Salzburg definitely didn’t disappoint. Mozart’s birth house, the tiny corner cafés, the winding streets with the iron shop signs hanging out front…it was so charming! Maxine gave us a thorough tour of the main sights of the Old Town, and we finished in front of St. Peter Stiftskulinarium, one of the oldest restaurants in the world. It was first mentioned in a letter to Charlemagne in 803 A.D. Maxine had taken the liberty of making a lunch reservation for our group, but given that it’s kind of a pricey place, Dani and I opted out and hit the market for a quick bite instead so we could maximize our three hours of free time.

We knew we wanted to see the Sound of Music abbey, which is at the top of the hill, just next to the fortress so after our snack, we set out through the old town to find the trail to the top. Thankfully it wasn’t too challenging of a walk and we made it up the hill to the abbey relatively quickly. We spent some time poking around the outside and inside the smaller chapel; everything was peaceful and quiet. Of course we couldn’t stop ourselves quoting the moving as we stood at the gate where the Von Trapp children come to see Maria after her sudden departure from the Von Trapp household. Unfortunately, there was some cloudiness/fog/pollution that day, so the view of the Austrian alps from the abbey – which is magnificent, or so we heard – was somewhat obscured. 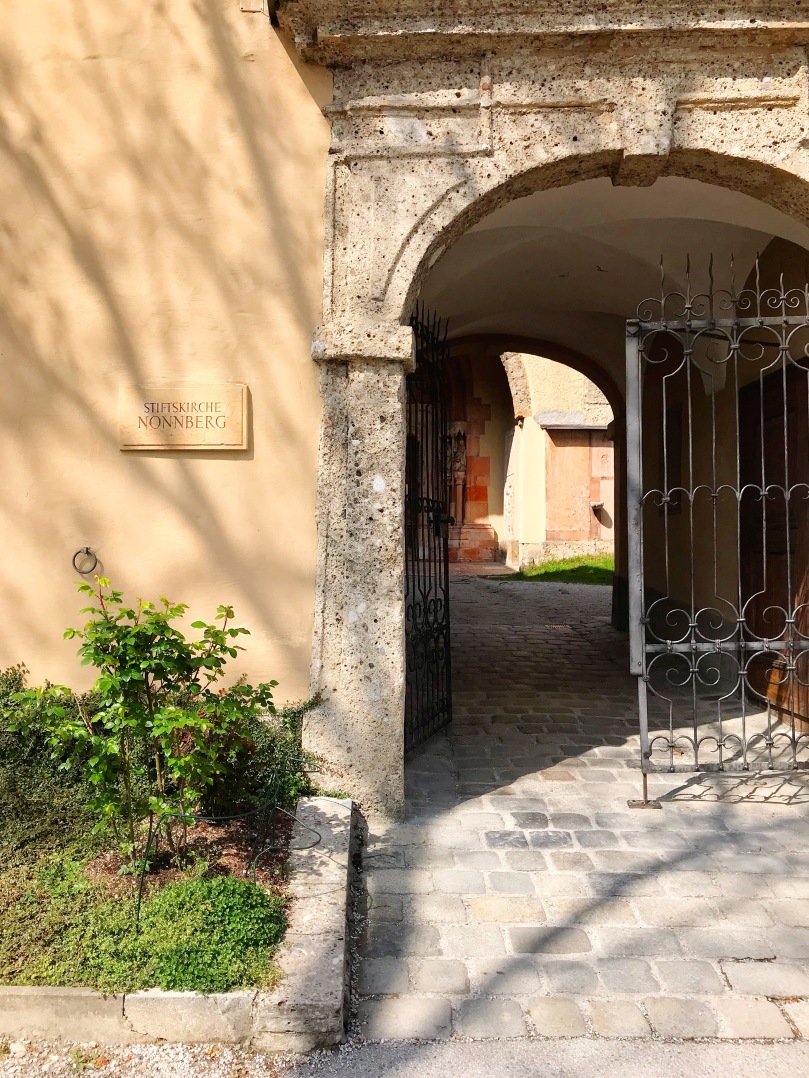 Coming back down from the abbey, we stopped to split a beer at one of Austria’s oldest breweries, Stiegl, founded in 1492 and supposedly frequented by Mozart. While we were there, we ran into Maxine, our guide, who let us know that lunch at the restaurant had run a little longer than she’d thought, so we had the option to stay one hour longer in Salzburg if we so chose. Score! With the extra time, decided to go for Kaffee und Kuchen (coffee and cake) at a little family-owned café that our guide recommended, where we indulged in two different kinds of cake and milchkaffee.

After our afternoon dessert, there wasn’t a ton of time left before our departure, so we did what we do best – went and sat next to the Salzach river and enjoyed the sun. Unfortunately our train ride home – though beautiful, as the fog/cloudiness had lifted and we could see the mountains and countryside – and our enthusiasm from the day were marred when an accident on the train tracks delayed our already late return to Munich by about another hour. Then, as we were sitting on the tracks, came the news that Notre Dame cathedral in Paris was burning. Joy tempered, we returned back to our hotel.

Reflecting on our day in Salzburg now, however, I can only smile! We knew we would enjoy it, but like our experience in Poland, we had no idea just how lovely Salzburg would actually be. It definitely has inspired us to visit Austria again in the future, and to perhaps spend a little bit more time in the countryside.